Lumbini, ‘Where I was Born’

Some 2,600 years ago, underneath the moonlit shadows of two tall trees, Sakyamuni Buddha was approaching the end of his life. At the age of 80, laying on his right side, he urged his followers to ask questions. He gave instructions and told his closest disciple Ananda that there were four great places of pilgrimage central to his journey: Lumbini, where he was born; Bodh Gaya, where he achieved enlightenment; Sarnath, where he preached his first sermon; and Kusinagar, where he would achieve his “Great Passing Away” or Mahaparinirvana.

For centuries since, the small town of Lumbini in Southern Nepal, has been a centre for Buddhist pilgrims and travellers. Archaeological excavations show the first shrine at Lumbini was built soon after the Buddha’s death. The first recorded pilgrim was the Mauryan Emperor Asoka in 249 BCE.

Today, Lumbini remains one of the most spiritually and historically significant sites in the world. Buddha was born here in 623 BCE. He grew up some 30 miles away in Kapilvastu, the ancient capital of the Sakya kingdom until the age of 29. Devdaha, his maternal hometown, is 25 miles away and Ramagrama is believed to be the only stupa in the world still containing the corporal relics of the Buddha. UNESCO declared the Sacred Garden Area in Lumbini as the Birthplace of Lord Buddha and a World Heritage site in 1997. It is now visited by more than 1.5 million pilgrims and visitors a year.

“O Ananda after I am no more, men of belief will visit the place with faith, curiosity and devotion, Lumbini the place where I was born….”

Garden of the Gods

“When the queen saw it [Lumbini] a desire to sport in the grove arose….and the attendants carrying the Queen entered the wood…She went to the foot of a great sal-tree and desired to seize a branch. The branch, like the tip of a supple reed, bent down and came within reach of her hand.….Holding the branch and even while standing she delivered. At that moment the four pure-minded Maha-brahmas came with a golden net and therewith receiving the Bodhisattva set him before his mother and said: Rejoice O Queen, a mighty son has been born to thee.”

Nidana-Katha from the Pali Tripitaka

Originally a landscaped pleasure garden jointly maintained by the Sakya and Koliya clans, who were related by blood, Lumbini was located somewhere between their two capitals of Kapilavastu and Devdaha. Suddhodana of the Sakyas wedded Maya Devi of Koliya. who would become Siddhartha Gautama’s mother.

According to Buddhist texts, Maya Devi was travelling from Kapilavastu to her home city of Devdaha to give birth, in accordance with birth customs of the time. Stopping to rest and bathe at a pond in Lumbini, she went into labour, and gave birth beneath a sal tree.

The infant Siddhartha is said to taken seven steps and declared himself the bringer of peace, while also stating that this would be his last incarnation. In the accounts of some traditions, Maya then bathed her newborn in the nearby pond while in others, nagas or attendant deities bathe him; these accounts have established a ritual that continues to be observed in East Asian Buddhist traditions.

The entourage then returned to Kapilavastu where soothsayers prophesied that the newborn would grow up to become either a mighty ruler or spiritual leader of great note. Maya Devi wouuld pass away seven days after her son’s birth and he was subsequently raised by her younger sister, Prajapati, whom Suddhodana took as his second wife.

Today a Marker Stone identifies the exact location where the Buddha is believed to have been born. The Maya Devi Temple was built to protect it. Recent archaeological discoveries show that as early as the 6th century BCE, a brick base shrine was built around a tree. This extraordinary finding suggest that this could be the earliest Buddhist shrine identified in Asia. 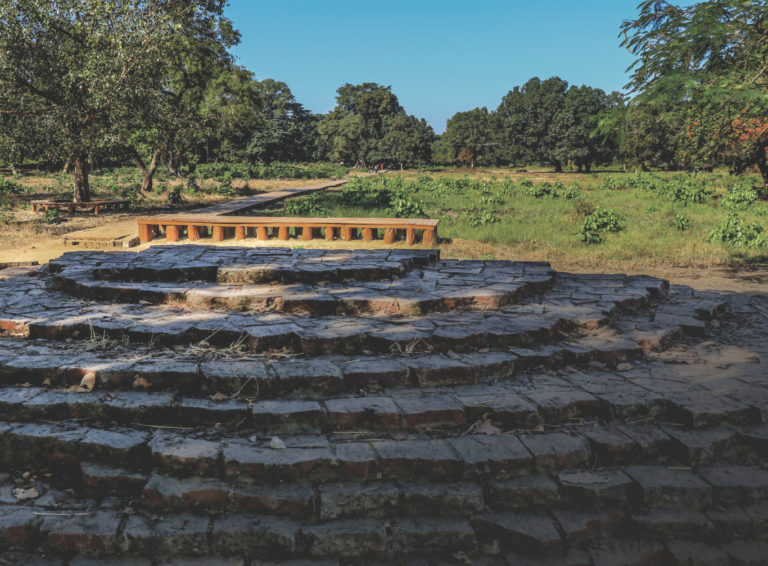 Just 27 kilometres west of Lumbini, in today’s Tilaurakot, exists the remains of a fortified city widely identified as Kapilavastu, the ancient capital of the Sakya clan. Historical texts describe the city as a bustling one full of palaces and groves. This is where Prince Siddhartha lived a gilded, sheltered life inside the palace walls until the age of 29. [Learn More] 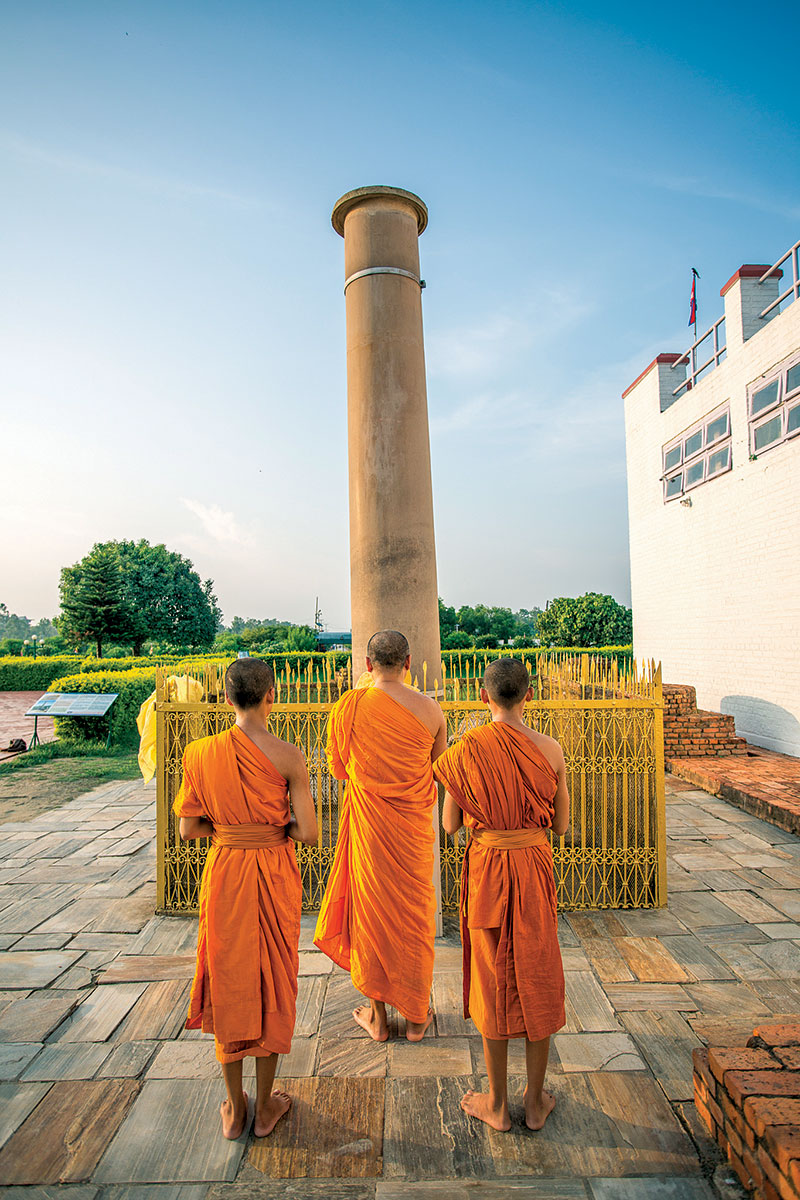 An Ancient Tradition of Pilgrimage

Following the Buddha’s “Great Passing Away” or Mahaparinirvana, Lumbini became an important site for pilgrimage. Archaeological remains around the Maya Devi Temple indicate that the sacred site once played host to a monastic settlement – it’s therefore fitting that different Buddhist traditions have set up monasteries and meditation centres in present-day Lumbini. Recent archaeological discoveries also reveal that a village existed nearby, which met the needs of the religious communities that visited or lived in the sacred complex since the 6th C. BCE. [Learn More] 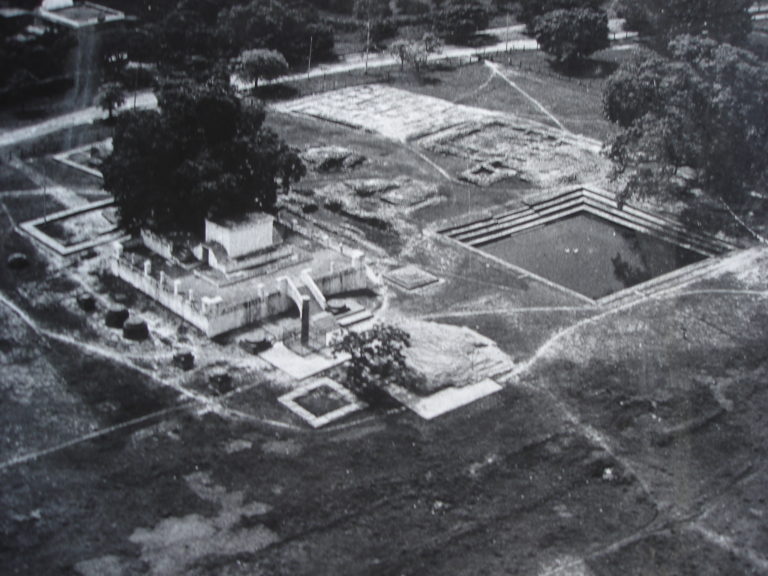 The vast network of exchange and travel set into motion by the tradition of Buddhist pilgrimage dissipated at some point, with the last known prominent visitor to Lumbini being the Nepali Prince Ripu Malla in the 14th C. CE. Rediscovered in 1896 CE, Lumbini began to regain its place in the global imagination with the help of Jawaharlal Nehru and King Mahendra in the 1950s, and later through the efforts of the Nepali Theravada monk Bhikkhu Aniruddha Mahasthavir, United Nations Secretary General U Thant and the Japanese architect Kenzo Tange. [Learn More]