Art-historical narratives have the ability to shape not just how nations perceive themselves, but also how they are perceived by the global community. The ‘rediscovery’ of South Asia’s Buddhist art in colonial times was subsequently mobilised by India’s post-Independence administrators to define their country’s most visible symbols. Indian currency, postage, passports, and all state insignia use non-partisan Buddhist symbols.

This talk explores the ways in which Buddhism has informed modern political symbolism in South Asia. Taking an in-depth look at Buddhism’s ‘soft power ’ and the role it has played in Asian politics, Prof. Ahuja provokes us to think about the possibilities that Nepal has with regard to Lumbini and its Museum. 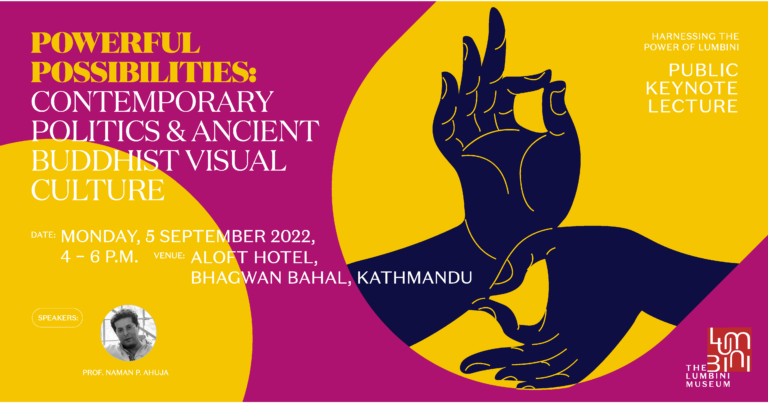 Naman Ahuja is a Professor of South Asian art history at Jawaharlal Nehru University where he is also the Dean of the School of Arts & Aesthetics. Prof Ahuja has curated some of the most important exhibitions of Indian art in the past ten years, including The Body in Indian Art & Thought which was shown at the Palais des Beaux Arts in Brussels in 2013 and the National Museum in Delhi in 2014; and India & The World, in which 120 objects from the British Museum were staged in strategic dialogue with Indian objects at the CSMVS in Mumbai and the National Museum, Delhi. He is the General Editor of Marg Publications, India’s oldest publishing house dedicated to the arts and culture apart from being a widely published author himself. His scholarship covers a wide range of issues in visual culture, aesthetics, iconography and transculturalism.

To register for this event, kindly fill up the form below: